The air-breathing Pratt & Whitney J58 turbojet engine (company designation of JT11D-20J/K) was initially designed for service with the United States Navy (USN) as a high-performance powerplant for extended high-speed/high-altitude work (in excess of Mach 3.0 and 80,000 feet). Work on the system began in the late 1950s, with the first examples being run in 1958, and continued into the following decade resulting in ten operational examples had in 1963. The engine was notable in becoming the first turbojet type to sustain Mach 3.0 speeds for extended periods of time, giving the SR-71 considerable performance advantage against any known Soviet threat to aircraft. The engine also formed the power source of the similar, and earlier, Lockheed A-12 high-altitude reconnaissance platform (thirteen A-12 airframes and 2 M-21 drones being built) and the SR-71's other predecessor, the YF-12 interceptor (three examples built). 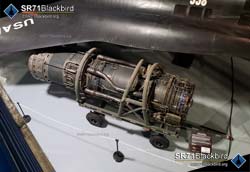 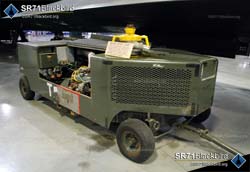 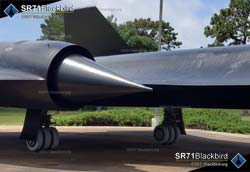 Two forms of general operation was afforded to the powerplant and these needed for take-off actions and supersonic Mach 3.0+ cruise endeavors. This was made possible by the compressor bleed function engineers built into its design allowing the engine to increase its thrust output at higher-speeds following take-off. Conventional turbojet thrust function was had for take-off actions and general cruising up to Mach 2.0 - it was then that a permanent compressor bleed system was enacted for the needed additional thrust output.

Overall length of a single unit was 15 feet with a diameter of 4.17 feet. Dry weight reached 6,000lb. The compressor was a nine-stage axial flow type with cannular eight burner 'cans' arranged in an annular combustion casing. The turbine component was detailed as a two-stage axial flow type. Fuel could be JP-7, JP-4, or JP-5 and this was received either while on the ground or in air by way of a tanker aircraft. Fuel was contained in six onboard tank groups totaling nine stores for a grand total of 12,219 US Gallons.

Combined with the sleek styling of the SR-71 aircraft, the J58 allowed the SR-71 to function as no aircraft had before. 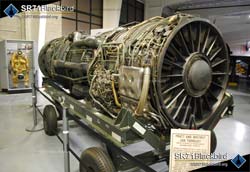 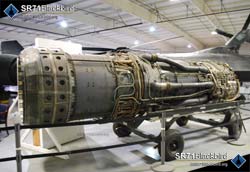 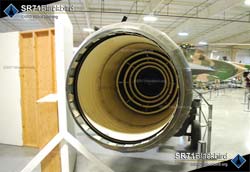 The engines were housed in cylindrical nacelles and capped at the front with a movable 'spike' shock cone and sporting traditional circular rings at the exhaust section aft. For general traveling under Mach 0.5, the shock cone was fully forward and a forward bypass doors opened, aft bypass doors closed, and mid-set 'suck-in' doors opened. Tertiary doors at the rear, ahead of the exhaust ring, were open and ejector flaps closed.

At speeds over Mach 0.5 but under Mach 1.5, the spike remained forward, the forward and aft doors closed along with the suck-in doors. The tertiary doors remained opened and ejector flaps were remained closed.

At speeds nearing Mach 1.5, the spike was forward, the forward bypass doors opened or closed as needed and aft bypass doors were sealed. The suck-in doors were also closed as were the tertiary doors with the ejector flap now being opened.

For Mach 3.2 speeds, the spike was retracted further, the forward bypass doors closed (opened as required), and suck-in doors were closed. The tertiary doors were closed and ejector flaps were set to open. It was at this speed that most of the thrust produced actually came form the inlet as opposed to the engine in an 80/20 ratio split. The arrangement worked flawlessly to reduce turbulent air from the spike's surfaces. At the very aft of the cone resided a silver ring which contained slots to vent air overboard.

The J58 was large enough to require its own specialized start cart, the AG330, as the USAF lacked any other system capable of turning the massive engines for start-up. A pair of 425 cubic inch Buick 'Wildcat' engines were used in the initial form, these mated to an automatic transmission system and used to help bring the J58 'turbo-ramjet' engines up to an ignition speed of 4,500 rpm. Eventually Chevrolet engines of 454 horsepower replaced the Buick mounts. The engines started at full throttle, generating substantial amounts of heat, noise, light, and vibrations to the surrounding area. 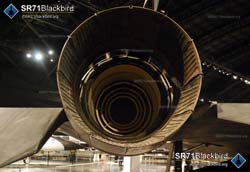