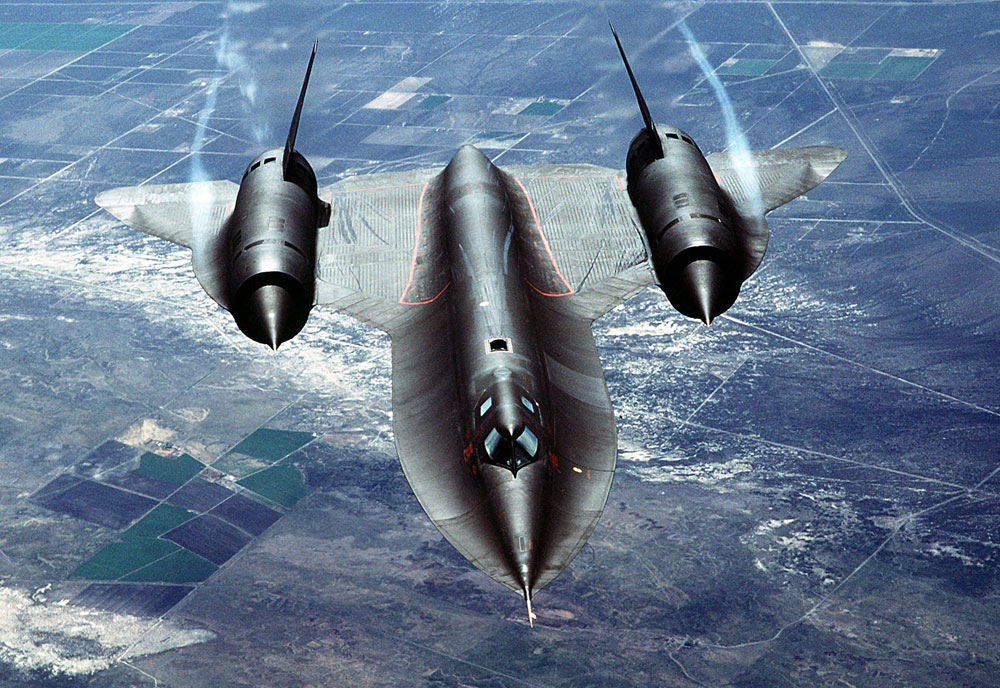 The SR-71 is the iconic American-originated spyplane of the Cold War period (1947-1991) thought to have been formally born as the 'RS-71' ('Reconnaissance System') but wrongly referred to in a speech by U.S. President Lyndon Johnson as the 'SR-71' when the program was officially unveiled. Rather than embarrassingly correct the then-President of the United States, the SR-71 designation is said to have become official. However, records show that the designation was proven to be correct in the text speech given to LBJ but a stenographer's error in the official transcript, the text handed out to reporters that day, revealed the designaton to be 'RS-71'.

This spyplane was specifically developed for the high-speed, high-altitude strategic reconnaissance role to flying higher and faster than Soviet air defenses could reach. The program caught traction in 1959 under the direction of Lockheed's Vice President for Advanced Development Projects, Clarence 'Kelly' L. Johnson, as a direct successor to the vulnerable Lockheed U-2 'Dragonlady'.

The U-2 entered service in 1956 and 104 were built of the single-seat, single-engine, straight-winged high-altitude reconnaissance platform. However, its vulnerability to Soviet Surface-to-Air Missiles (SAMs) was revealed with the downing of Gary Powers in during 1960. The newer SR-71 was to prevent this by simply out-flying and threats - be they missiles or manned interceptors.

The early iteration of the machine became the 'A-12' and its form was forged at the secretive 'Skunk Works' facility in Burbank, California. Seven airframes of this Mach 3.0+ performer were manufactured into 1964 and the series was formally introduced in 1967, flying only into 1968. Flying for the first time on April 26th, 1962, thirteen total aircraft were completed in the series as were a pair of related M-21 drones based on the A-12's engines.

The experimental interceptor form of the A-12 became the 'YF-12A' - though only three of the type were produced. This variant flew for the first time on August 7th, 1963 and eventually operated with the USAF as well as NASA before being cancelled and retired.

With this foundation, the SR-71 was the strategic reconnaissance-minded offshoot of the A-12/YF-12A work and this program was pursued despite the cancellation of the YF-12A and the retirement of the A-12. The prototype of the soon-to-be Blackbird (its unofficial name) flew for the first time on December 22nd, 1964 and the series saw formal service introduction during January of 1966. Initial examples were delivered to Strategic Air Command (SAC) and this encompassed the two-seat SR-71B trainer form (s/n 61-7957). The aircraft were handed over to the 4200th SRW of Beale Air Force Base in California (activated just a year earlier), the event occurring on January 7th, 1966.

Extensive training in the classroom and conducted through Northrop T-38 'Talon' Advanced Jet Trainer (AJT) aircraft was had before transitioning to the SR-71 cockpit. Beale took on a fleet of eight trainers for the requirement in July 1965. The 4200th was then redesignated to become the 9th SRW (Strategic Reconnaissance Wing), encompassing the 1st SRS (Strategic Reconnaissance Squadron) and 99th SRS.

Four SR-71 aircraft were deployed to Kadena Air Base on Okinawa to oversee operations over the Southeast Asia under the codename of Giant Reach for a seventy-day period. The first sortie flown over Vietnam was had in April of 1968.

On April 20th, 1976, the SR-71 was based out of RAF Mildenhall, United Kingdom for a ten-day span. This initially involved s/n 64-17972 and no fewer than two SR-71s were available to Western warplanners - meant to cover the Arctic, Baltic, and Mediterranean airspaces near and over the Soviet Union. From then on, flights from the UK became more and more common with the looming Soviet threat a short distance away. The aircraft were organized under Detachment Four of the 9th SRW, overtaking U-2 spyplanes in the same role.

The fleet was initially retired by the USAF on January 26th, 1990 but reinstated during 1995 and flew into 1997 before being given up for good. By this time, satellites had grown in capabilities by way of advanced technologies and the Cold War between East and West had ended in 1991, resulting in a massive drawdown of military power for each side.

For its time in the skies, the SR-71 was unchallenged in the world as the fastest, highest flying operational-level aircraft. Soviet pilots even recounted experiences where their high-performance interceptors, and even their missiles, held little hope in ever catching the elusive bird - such was its imprint on aviation history.
Site Disclaimer  |  Privacy Policy  |  Cookies